Today is the 3rd anniversary of the Grenfell Tower Fire in London, which claimed 72 lives.

The fire was thought to be caused by a faulty refrigerator and further spread by the extremely flammable cladding on the tower’s exterior. 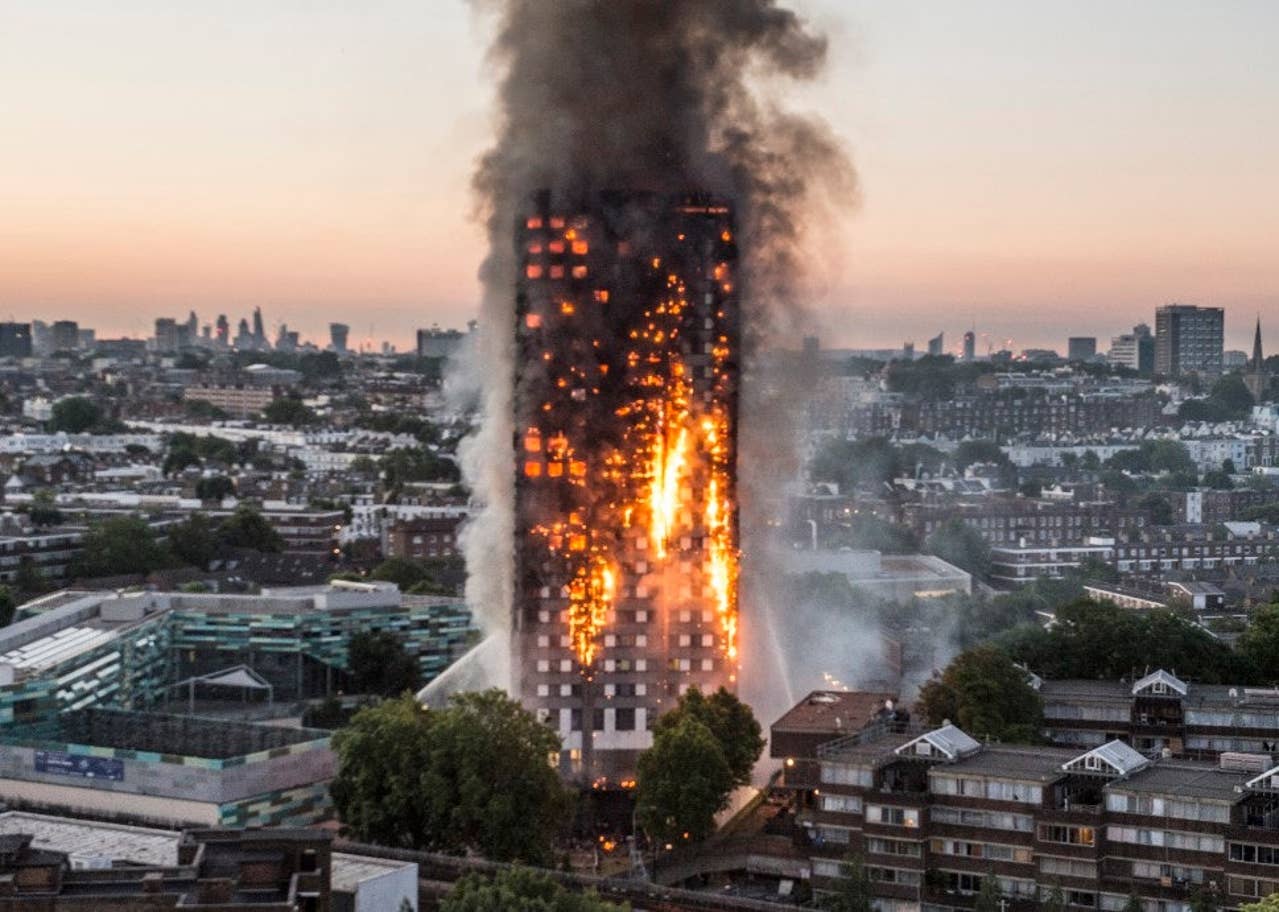 The survivors of Grenfell Tower fire, which killed 72 people, have said “nothing has changed” three years after the disaster.

Those who escaped from the west London tower block said they feel “left behind” and “disgusted” by a lack of progress in making other buildings safe.

Churches across London will ring their bells 72 times to mark those who died.

The inferno at Grenfell – the biggest domestic blaze since the Second World War – started as a small kitchen fire.

It spread to engulf the whole building, and the type of cladding used has been blamed.

A Parliamentary committee has warned cladding, like that which helped the flames spread, could cost up to £15bn to remove nationwide.

On the third anniversary of the fire, with commemoration services planned online, survivors and relatives also expressed disbelief that a public inquiry into the disaster had yet to conclude.

Hearings were paused in March because of the coronavirus pandemic and are due to restart on 6 July.

Karim Mussilhy, whose uncle Hesham Rahman died in the blaze, said “there’s not a lot of compliments right now” for the government.

“It never feels like there’s any urgency with the emergency that this country is in with the whole cladding situation.”

Survivor Tiago Alves added: “We knew this wasn’t going to be an easy fight. Did I think we’d still be here three years on still talking about the removal of cladding? I think that’s a bit absurd.”

Joseph John, who escaped the fire by climbing out the window of his second floor flat with his then-partner and child, has said he feels “disgusted” about where victims still find themselves.

“I feel like I’ve been left behind since Grenfell, I haven’t been supported.” 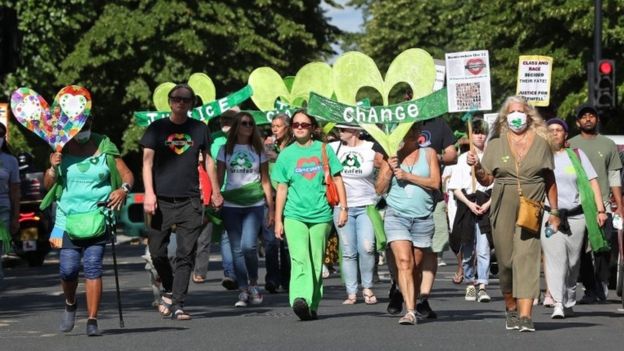 Campaign group Grenfell United – set up in the wake of the tragedy – organised a series of events, including online commemorations.

A silent march was held to honour victims on Sunday afternoon, and a video message from singer Adele, who visited the site shortly after the fire, was played to a virtual service.

“Even though we’re having to do this in the virtual world, online, 2020 Zoom life as it is, it is still so important for us to mourn together, and for us to remember that night and to reflect on that and also reflect on where we are now,” she said.

“And also to celebrate the lives that were lived before sadly being taken that night.”

Rapper Stormzy also sent a message of support to the survivors and those affected by the disaster.

“To all the people of Grenfell, we’re still mourning with you,” he said.

“When the Government and the powers that be have turned their back on you, we’re here. We’ve got you, we remember.

At 22:30 BST, people in homes across the UK have been asked to shine a bright green light from their screens to show solidarity with the bereaved and survivors.

Messages from Prime Minister Boris Johnson and Labour leader Sir Keir Starmer were played at a virtual service hosted by the Bishop of Kensington.

Mr Johnson said: “As a nation, we are still dealing with the consequences of what happened and working to make sure it never happens again.” 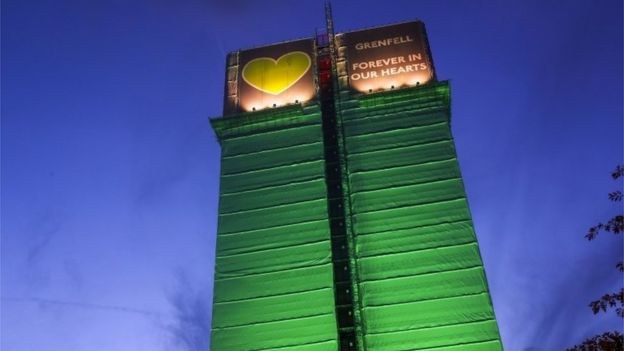 He added stricter laws on fire safety had been introduced and that the government was working to implement “every recommendation made by the first phase of the public inquiry”.

Labour has estimated 56,000 people were still living in homes wrapped in the same flammable cladding as Grenfell.

“In the midst of their suffering, the Grenfell community came together to campaign for justice, safe homes and change.

“Because no-one should ever go through the loss and pain they experienced,” said Sir Keir.

“But three years on and, unbelievably, tonight, people will go to bed in unsafe homes,” he added.

In a written statement, London Mayor Sadiq Khan said he would be relentless in ensuring the Grenfell community gets justice and that Londoners would feel safe in their homes.

A Ministry of Housing, Communities & Local Government spokeswoman said it had set up the Building Safety Programme and testing process to identify all high-rise buildings with ACM cladding and had worked with councils to ensure buildings at risk were made safe.

The Fire Brigades Union said high-rise residents faced a “postcode lottery” concerning how many firefighters would be sent to their building in the event of a blaze.

It said “many brigades would not be able to mobilise anywhere near the scale” that was needed to tackle the Grenfell Tower fire. 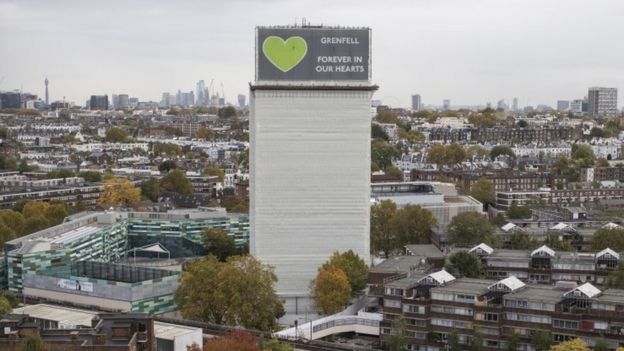 A public inquiry is due to restart in July

You can find out more about which cookies we are using or switch them off in settings.

This website uses cookies so that we can provide you with the best user experience possible. Cookie information is stored in your browser and performs functions such as recognising you when you return to our website and helping our team to understand which sections of the website you find most interesting and useful.

Strictly Necessary Cookie should be enabled at all times so that we can save your preferences for cookie settings.

If you disable this cookie, we will not be able to save your preferences. This means that every time you visit this website you will need to enable or disable cookies again.

This website uses Google Analytics to collect anonymous information such as the number of visitors to the site, and the most popular pages.

Please enable Strictly Necessary Cookies first so that we can save your preferences!