What is seismic isolation?

Mechanism of a seismically isolated building.

“Seismic isolation” is a method of protecting a building from major earthquakes. “Isolators” are installed between a building and the ground to reduce vibrations that transmit to a building. It is as if the building were in a condition of floating in the air above the ground. This building is called a seismically isolated building.

The following animations show the properties of buildings during earthquakes.

These buildings are set on the ground, vibration of earthquakes is brought directly to the superstructure.
Building vibration is severe, there are possibilities that furniture will move and overturn sometimes, doors distort, and walls crack.

Devices are installed between building and the ground, and they absorb energy of vibration during the earthquakes. They can reduce vibration of building. Building vibration is very slow, there are few possibilities of the foresaid situations.

What kind of Devices for seismic isolation used in buildings?

Generally, isolators and dampers are used. There are three types of isolators as shown below. 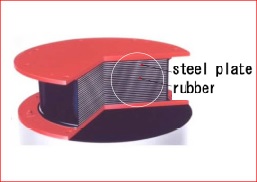 The slider has a coating of PTFE and a stainless steel plate finished with smooth surface as a mirror in the Photograph. It works as bearing to sustain the weight of the building and is able to move the building laterally on the surface of the plate with a certain amount of friction. 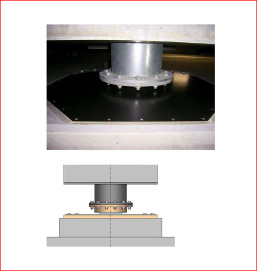 It consists of ball bearings with retainers and rails or plates as shown in the Photograph. It works as a bearing to sustain the weight of the building and is able to move the building laterally without friction. 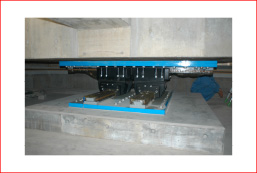 It utilizes the elasto-plasticity property of steel.
The hysteretic loop contributes to energy dissipation. There are two types of steel dampers, one is square in section and other is round in section of the rods as shown in the Photograph.

It utilizes the plasticity property of lead. The hysteretic loop contributes to energy dissipation. There are two types of lead dampers, one has a round section and a curved shape as shown in the Photograph and other has a cylindrical plug in core of the elastomeric isolator. 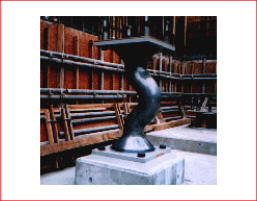 It utilizes the viscous property of fluid. Oil or silicon are used as the fluid. Viscous resistance contributes to energy dissipation. Oil damper is a cylindrical shape as shown in the Photograph.

You can find out more about which cookies we are using or switch them off in settings.

This website uses cookies so that we can provide you with the best user experience possible. Cookie information is stored in your browser and performs functions such as recognising you when you return to our website and helping our team to understand which sections of the website you find most interesting and useful.

Strictly Necessary Cookie should be enabled at all times so that we can save your preferences for cookie settings.

If you disable this cookie, we will not be able to save your preferences. This means that every time you visit this website you will need to enable or disable cookies again.

This website uses Google Analytics to collect anonymous information such as the number of visitors to the site, and the most popular pages.

Please enable Strictly Necessary Cookies first so that we can save your preferences!